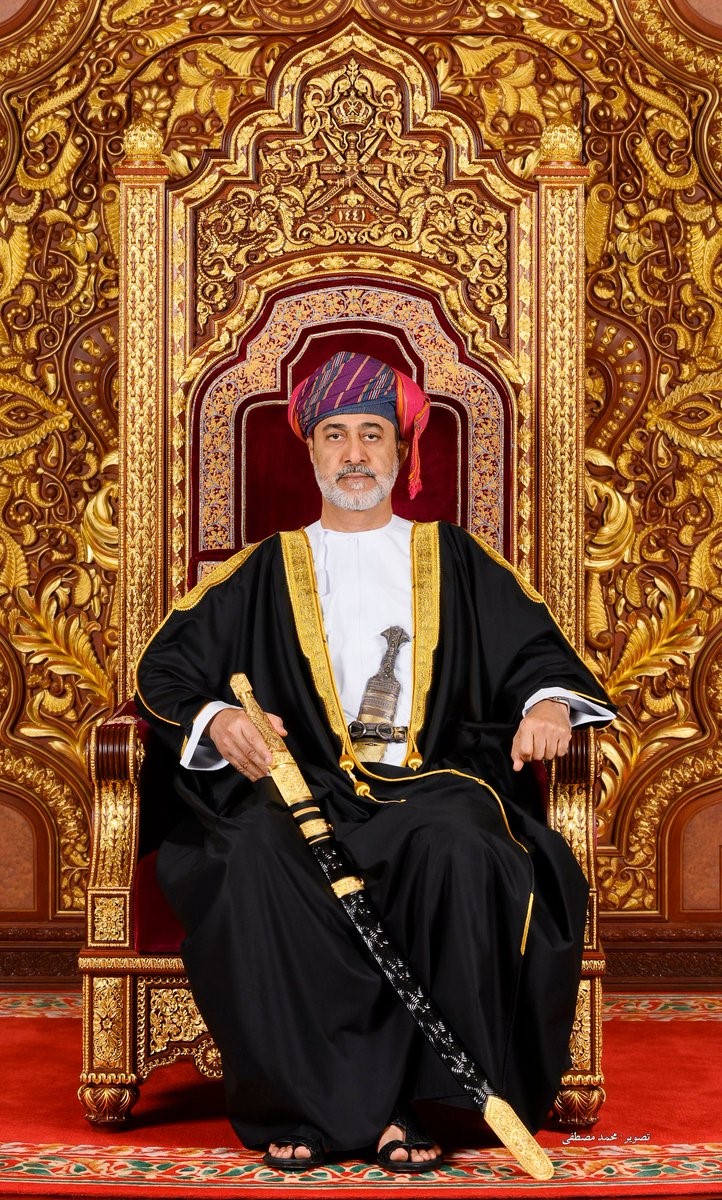 “In the name of Allah, the Most Gracious, Most Merciful, in the name of the Praiseworthy Allah, the Wise, Venerated One,
The One Hallowed equally in contentment and distress; Glory Be to Him Whose judgement can not be revoked, the One
Who conducts all affairs with no intercessor acting beyond His will, tok Him we resort in praise, foremost and finally – peace and blessings be upon His prophets, His messengers and their faithfull disciples.

The will of the Almighty Allah on His beings is inevitable and to Him we shall all return. It was the Almighty Allah’s will that we have lost the best of men, the forgiven one, God willing, Sultan Qaboos Bin Said Bin Taimour; a man who can not be served right by such a speech, as no words can calculate what he had achieved and accomplished. He set up a modern state from scratch, a country that is now recognised by all, far and near. He established a deeply rooted renaissance whose features have crystalized in a schema of laws and legalisations that fortify this country and channel the progress of its march towards the blossoming future that he wished. He set up an infrastructure that has become the centre of attraction of the world. He established an economic and social structure founded on grounds of justice, sustainable development, productivity and diversification of the income.

The outcome of this is a steady rise in living standards of Oman citizens. He built study and constant frameworks for education – at all it’s levels – and specializations that are tapped by generations of citizens who relished knowledge and expertise.

May Allah, the Almighty, reward him as fully as a truthful Sultan can be recompensed for serving his country and his nation. May Allah place him in the company of the righteous “in the mids of Gardens and Rivers, in an Assembly of Turth on the Presence of a Sovereign Omnipoten” and may Allah grant Oman all causes of dignity, progress and power.

Words fall short of articulating a eulogy for a Sultan as great as him (Qaboos bin Said), or describe his good deeds and accomplishments. Our only relief – the best with which we can eternalize his achievements – is to pursue his rightful legacy and derive for the brilliant steps that he treated in full confidence and determination, to preserve the gains that he made and to build upon them. This is what we are resolved to execute, God Willing. We shall march forward on this road so that Oman could attain an maintain its prominent place in which (His Majesty Sult Qaboos)wished to position it and for which he stayed on vigils to realize that goal and alas, he was granted success in his endeavours.

In the foreign front, we shall ttrace the course of the late Sultan, reaffirming the fundamental of our country’s foreign policy, based on peacefull co-existence with nations, good neighbourliness, non-interference in the internal affairs of others, respect four contries sovereignty and international cooperation in various spheres. We will remain as the world had known us during the reign of the Forgiven one, God willing, His Majesty Sultan Qaboos. We will call and contrubute to resolving disputes by peacful means, sparing no effort in finding satisfactory solutions in a spirit of harmony and understanding.

We will continue contact with our brethren, leaders of Arab Gulf Cooperation Council (GCC), to enhance our contries march of collaboration to realize our peoples aspirations ad to push the GCC forward.

In the Arab front, we will continue to support the Arab League and cooperate with our brethren, leaders of Arab States, to achieve the goals of the Arab League, promote our citizens lives, distance this region from conflicts and work for economic integration that will serve our Arab peoples.

Oman will maintain its role as an active member of the United Nations Organization, a member that respects the UN Charter and works with member states towards achieving international peace and security, as well as economic prosperity for all countries of the world. We will build out relations with all word countries on the basis of the great heritage left behind for us by the late Sultan, God bless him, a heritag whose essence is based on commitment to relations of friendship and cooperation with all and repect for charters, laws ad agreements signed with other countries and organizations.

Dear Citizens:
Dear citizens, our country could not have achieved all this if it had not been for the charismatic leadership of His Majesty Sultan Qaboos bin Said bin Taimour, as well as the solid principles on which he had set up the edifice of the modern state. It would not have been realised without your rallying around his leadership, your pride over what we have all achieved under his judicious leadership. It would not have been without established security, well-deployed across the terrain of this country. It would not have been realised without the existence of modern Armed Forces that are fully mobilised and highly qualified in all its branches and sectors. It would not have been realised without the existence of security services that secured the stability of this country and gained the respect of citizens. We appreciate the role of all in safeguarding the gains of the Sultanate and reiterate our support to them all and our pride over their role.
People of Oman:
The trust thrust on our shoulders and the resultant immense responsibilities require us all to work together for the sake of our country’s magnificence, with a persistent resolve to promote it to the loftiest levels. This cannot be realised without your support and cooperation and combination of all efforts to achieve the desired supreme national goal. Your contribution to enrich all eforts of progress, development and prosperity will be highly appreciated. “May the Almighty Allah protect you in His divine care and may He grant His mercy and forgiveness to His Majesty Sultan Qaboos bin Said bin Taimour and reward him plentifully. May Allah grant us success in pursuing his course and accomplishing the objectives that he wished to be realised for this great nation.”